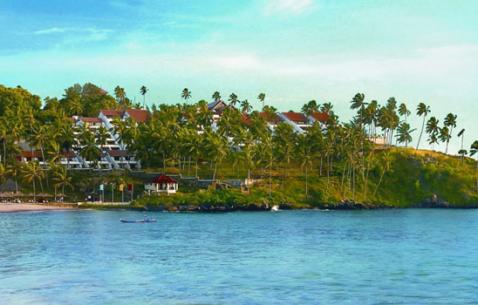 Kovalam is located by the Arabian Sea in the Indian state of Kerala. The name of the state has been derived from the Malayali word ‘Kovalam,’ which means ‘Grove of coconut trees’ and as the name suggests, the city’s most prominent character is the endless rows of coconut trees. The city first came to light in the 1920’s with the construction of the first beach resort called Halcyon Castle by the Regent Maharani Sethu Lakshmi Bayi of Travancore. The spot soon turned into a tourist and beach destination for the European guests of the 1930’s. Kovalam once again shot into limelight in the early seventies with arrivals of the masses of hippies on their way to Ceylon in the Hippie Trail, exposing the rich and unique culture of the area and transforming it into one of the most sought after travel destinations in the world. Today this pristine land boasts white sand beaches, stunning views of the Arabian Sea, ayurvedic treatments, lakes, rivers, historical structures, shopping districts, excellent cuisine, outdoor activities and adventure sports, aptly giving it the name of the ‘Paradise of the South’. In the relaxed, tranquil ambience of Kovalam, one can spend the day loafing on warm sand, watch the sun set, visit the beach shacks or rejuvenate the senses by indulging in a well renowned Ayurveda Massage. Kovalam is a land of endless possibilities and it is inevitable that one would stumble upon some new treasures and exciting adventures that the city has to offer.

Essential travel information and Kovalam tips for your visit