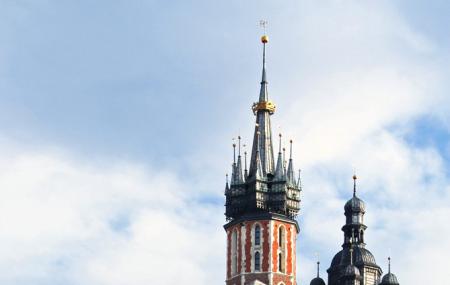 Originally built in the 13th century, the imposing structure that stands opposite the main market square was completed in 1347. Built in the brick Gothic style it has now become a template for Polish style churches all over the world. The brooding exterior, with two towers, the taller at 80 metres built in the classic Gothic spiral, is contrasted by an opulent and rich interior. Of note is the wooden altar piece, which at 13 m of height and 11 m of width, is the largest Gothic altarpiece. It has an interesting history which begins with it being carved in the 15th century by famed Gothic and Renaissance sculptor Veit Stoss. To protect it from the Germans, it was dismantled and kept in crates mere weeks before the Second World War. However the Germans found the crates and looted them, as they often hoarded priceless historical artefacts and works of art to fund the war effort or to add to their collection. The crates ended up in Nuremburg Castle, where despite heavy bombarding they survived and the altar piece was restored to its rightful place and former glory in 1949. Every hour, the HejnaÅ‚ Mariacki, a traditional Polish anthem is played on the trumpet from the top of the taller tower. This is an 8 century old tradition kept alive to this day, with the noon trumpet call being broadcast over the national radio.

How to Reach St Marys Basilica

Love this? Explore the entire list of places to visit in Krakow before you plan your trip.

Fancy a good night's sleep after a tiring day? Check out where to stay in Krakow and book an accommodation of your choice.