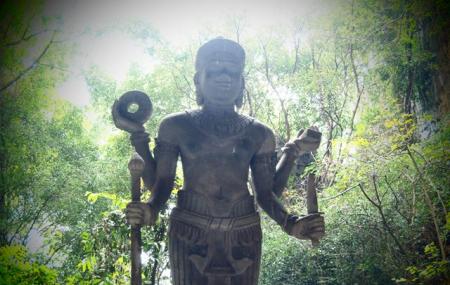 The Phnom Sampeau is a mountain in Battambang known for its Killing Caves that have skulls and bones of hundreds of people who were killed during the reign of the Khmer Rouge. The climb to the mountain greets you with a number of beautiful lookout points, a number of bats that leave the caves during twilight and a few temples and statues that are sparsely spread along the way.

There are a number of limestone caves that are formed in the mountains- one of them being the Killing Cave. A walk into the killing cave and you can see a golden statue of reclining Buddha. A glass display holds the skulls of the victims nearby. At the bottom of the stairway that leads to the cave, you can find a section separated by chicken wire with thousands of bones that belonged to the men, women, and children who were killed by the Khmer Rouge. For many, this place is rather relaxing but it does have a terrifying story. It is believed that Khmer Rouge would force people to agree with false accusations and alleged crimes and kill them before throwing their bodies off from the opening on top of the cave.

It is unreal how this place is juxtaposed with the grand temples seen on top of the mountains. Grab a camera to come here to take a few scenic pictures or simply to see a part of Cambodia’s intense history. You can also find a few war weapons and artillery preserved here that points to the Phnom Krapau.

How to Reach Phnom Sampeau

Love this? Explore the entire list of places to visit in Battambang before you plan your trip.

Fancy a good night's sleep after a tiring day? Check out where to stay in Battambang and book an accommodation of your choice.