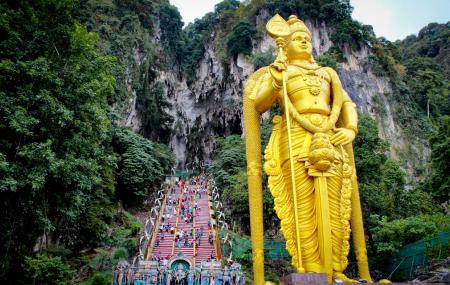 The main attraction at the limestone caves is the 42.7 metres high statue of Lord Murugan, a Hindu deity. This is also the largest known statue of Lord Murugan. During the Thaipusam Festival, the statue is the end point of the processionat the Sri Mariamman Temple in KL city centre. Over a million pilgrims gather here at festival time.

Within the largest of the chambers of the Batu Caves, the Cathedral Cave, there are some beautiful Hindu shrines, which can only be reached after climbing 272 steep steps. Hindu sculptures and paintings fill the Art Gallery Cave and Museum Cave. In the Ramayana Cave, you’ll find paintings depicting the epic story of Lord Rama.

Tip: Buy peanuts from the locals, and feed the many Macaque monkeys at the site.

The Batu Caves in Malaysia are very popular due to several reasons. Apart from being some of the oldest limestone caves in the world, they are also host to some of the most sacred religious monuments in Malaysia. You can buy tickets for Batu Caves online from our ticket booking section so that you don’t waste your time in long queues. Apart from buying tickets for Batu Caves you can also check Batu Caves ticket prices beforehand and even combine Batu Caves tickets with other touring options in and around Kuala Lumpur. Also, visit nearby attractions in the city which are covered in Kuala Lumpur itinerary 5 days.

How to Reach Batu Caves

Love this? Explore the entire list of places to visit in Kuala Lumpur before you plan your trip.

Fancy a good night's sleep after a tiring day? Check out where to stay in Kuala Lumpur and book an accommodation of your choice.

92.62% of people prefer to travel by car while visiting Batu Caves