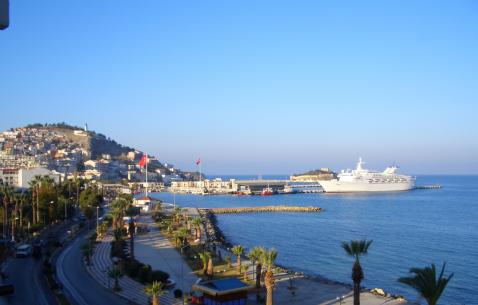 A mythical landscape of history, of sea, of glitter, of underwater caves and of music that finds its way through the bowels of the Aegean Coast- all these coalesce together in order to form Kusadasi, a city which yearns to merge with the azure waters. Tourism to Turkey can never be consummated without visiting Kusadasi which unravels stories of the past with the same vigour as it introduces its modern day hip culture through its bedazzling nightlife. A melange of Turkish- Greek culture, Kusadasi’s seascape is ideal to cuddle with the waves through a plethora of water activities resulting in a thrilling and adventurous holiday package.

Known as the “bird island” in Turkish, the city has been a witness to the glories of the human civilization ever since the Greeks. Bejewelled with the ruins of the temples in Ephesus, or the ancient structures, the city insinuates its visitors to recreate the Classical era. Today, the city is strewn with faux-English pubs, tattoo parlors, beach and souvenir shops and discos, evident of the ways in which it has co-opted cosmopolitanism and tourism within its belt. As for its beaches, there are a very few islands in this world which can parallel the transparent, serene and transcultural(Greco-Turkish) Kusadasi’s port, once a centre for trade and commerce.

An exemplary destination for those who consider sun and beaches to be their dreamland! Do remember to take your sips of famous Turkish coffee while being pampered by the touch of the sea- side breeze on your face.

Essential travel information and Kusadasi tips for your visit