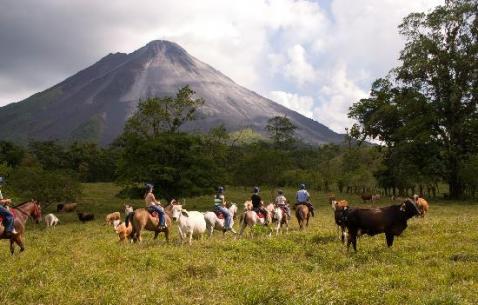 La Fortuna de San Carlos is a small town, located in Costa Rica. At first glance, one might feel that the town barely has anything to see, owing to its small area. However, a closer look will reveal why La Fortuna is one of the most bustling tourist centres in the entire country today, and why more and more people choose to visit this town every year when they make a vacation to Costa Rica.

Situated near the famous Arenal Volcano, La Fortuna was originally known as the town of ‘El Borio’, situated on the east side of the volcano. The Volcano was thought to be dormant, but there was a huge eruption in 1968. The Arenal Volcano violently erupted on its west side, completely destroying two villages, including that of Tabacon. The very next day, ‘El Borio’ was renamed La Fortuna, which means “the fortunate”, because it escaped the wrath of the volcano unscathed.

Till a few years ago, the Arenal Volcano was active, but of late it has shown dormant behaviour, and has mild eruptions from time to time which are harmless to the surrounding areas. As a result, the area around Arenal Volcano, and La Fortuna in particular, has thrived as a tourist favourite thing to do, for people who come from around the world to witness the sheer majesty of the volcano. Apart from that, there are other very interesting attractions in La Fortuna, such as the multitudes of hot springs, all of which are naturally heated by the volcano.

One of La Fortuna’s main activities, apart from the Volcano itself, is the many hot springs that are powered by the natural heat of the volcano. There are many hot springs resorts in La Fortuna, each one offering their own benefits and perks. The Tabacon Hot Springs are probably the most well-known of them all, with different types of pools and 5 star hospitality. If you’re not into the entire hot springs gimmick, you can still find tranquillity by the vast Arenal Lake, or taking a hike up to the scenic Cerro Chato Lagoon and spending a few hours there.

They even have a waterfall, not to mention the vast expanses of rainforest and fields surrounding the town. Not surprisingly, many adventure companies such as Wave Expeditions, Centaura and Costa Rica Descents have set up shop in La Fortuna, slowly turning it from a small town into a vacation hub. There are a number of souvenir shops in La Fortuna, which stress on exhibiting original work by local artists, which not only ensures you take home a unique memento, but also helps the artisans of the town ply their trade.

La Fortuna’s charm lies in the fact that it is a far cry from any other typical tourist friendly city you may have been to around the world. It is but a small town in Costa Rica, but despite that, the hospitality and unique attractions it boasts has made it one of the popular tourist destination, not just in Costa Rica, but in all of Latin America.

Essential travel information and La Fortuna tips for your visit

Plan Your Trip To La Fortuna

The best tours and activities in the city, guided by experts to give you a local insight to the best of La Fortuna