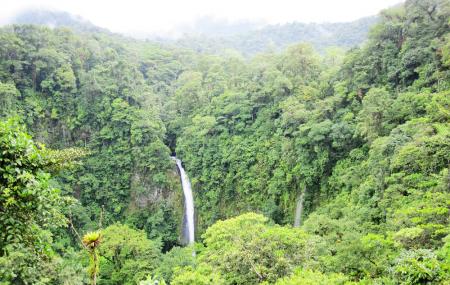 The La Fortuna waterfall is one of the most scenic locations around the city of La Fortuna de San Carlos. Situated about 5.5 km away from the town, it is a blissful getaway located at the base of the dormant and majestic Chato Volcano. Fed by the Tenorio River, the waterfall meanders through the dense greenery to plunge 200 feet into a glistening emerald pool below.

Don’t forget to bring along your swim suits, because the chilly water beneath the falls provides for quite an experience. You can go down the river as well, as the rocks aren’t sharp and makes for a great swim. It is said that taking a bad picture at the La Fortuna Waterfall is nearly impossible, and you’ll have yourself believing that too, when you take a look around. Photography enthusiasts will be in for a treat, because a short walk around the waterfall will provide them with various opportunities to capture numerous flora and fauna.

Just like La Fortuna Waterfall, most of the locations in Costa Rica are heavily protected to preserve their natural beauty. Thankfully, the money that you pay to get into these locations are very well spent on the preservation. Visitors will appreciate and respect the La Fortuna Waterfall for what it is, a view of nature at its finest.

How to Reach La Fortuna Waterfall

Love this? Explore the entire list of places to visit in La Fortuna before you plan your trip.

Fancy a good night's sleep after a tiring day? Check out where to stay in La Fortuna and book an accommodation of your choice.