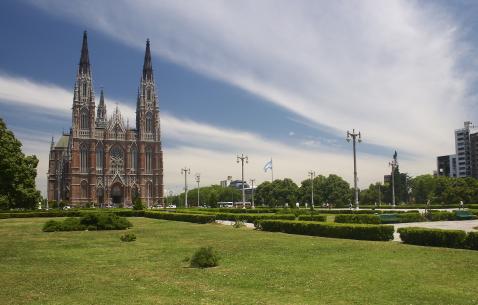 La Plata is the capital city of the Province of Buenos Aires, Argentina, and of the partido La Plata. According to the 2001 census [INDEC], it has a population of 765,378 and its metropolitan area has 899,523 inhabitants. La Plata was planned and developed to serve as the provincial capital after the city of Buenos Aires was federalized in 1880. It was officially founded by Governor Dardo Rocha on 19 November 1882. Its construction is fully documented in photographs by Tomás Bradley Sutton. La Plata was renamed Eva Perón City (Ciudad Eva Perón) between 1952 and 1955. The city is home to two important first division football teams: Estudiantes de La Plata and Gimnasia y Esgrima La Plata.

La Plata is the capital city of Buenos Aires Province- which is the main state of Argentina. It is situated about 56 kilometers south-east of Buenos Aires. The city’s urban design of a perfect square was worked on by Pedro Benoit and his team.