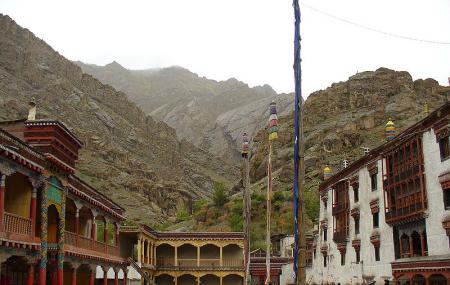 This affluent monastery, the largest in Ladakh, has been around for almost a thousand years, and is only an hour away from Leh by road. It would at times fall into disuse, but King Sengge Namgyain restored it completely in the seventeenth century. The Bropka sects, who are thought to be some of the purest descendants of the original Indo-European stock, manage it. The monastery is particularly famous for it’s annual two day Hemis Festival, celebrated in the honor of the Padmasambhav, or the “Second Buddha”.

During the festival, traditional songs and music are played using the pan drums, large regional trumpets and cymbals, and to this music, a highly esoteric “dance of masks” is performed. The monastery is also infamous; it’s suspected that this was a place Christ visited during his missing years, and there is much speculation that scrolls related to Christ, written in commemoration after the crucifixion, are kept here in secrecy.

How to Reach Hemis Monastery

Love this? Explore the entire list of places to visit in Leh before you plan your trip.

Fancy a good night's sleep after a tiring day? Check out where to stay in Leh and book an accommodation of your choice.

91.88% of people prefer to travel by car while visiting Hemis Monastery