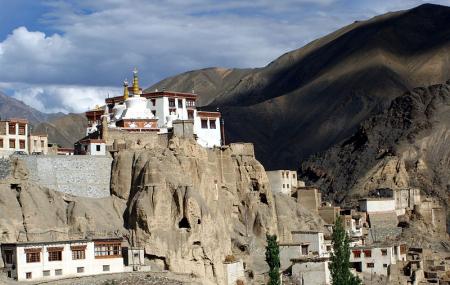 A hundred and thirty kilometres from Leh, the thousand-year-old Lamayuru Monastery is a famous traditional Tibetan Gompha following Buddhism, and is situated at an altitude of 3500 meters. The land surrounding the monastery is famously known as The Moonscape, as it strikingly resembles lunar landscapes. The monastery is regarded as the first ever monastery following the customary traditions of the Bonpo along with Buddhism. The monastery was allegedly founded by an ancient Indian scholar Mahasiddhacarya Naropa when the lake here dried up. The dried up bed of the lake is the foundation of the entire spread of the monastery.

The premises of the Lamayuru near the southern zone of the rock of Lamayuru, includes an ancient temple named as the Seng-ge-sgang. During the early years after the build, the main building premises of the monastery included five buildings, of which four have undergone natural degradation. However, the Lamayuru monastery houses almost 150 monks, and is regarded as among the largest as well as a heritage monastery or traditional gompha of Leh. During the second and the fifth month according to the lunar calendar of Tibet, the Lamayuru monastery holds two traditional dance festivals that characterize the usage of native traditional masks. The monastery is also situated close to the Wanla Monastery. Visitors may stay at the the Moonland Hotel or the Siachen Hostel.

How to Reach Lamayuru Monastery

Love this? Explore the entire list of places to visit in Leh before you plan your trip.

Fancy a good night's sleep after a tiring day? Check out where to stay in Leh and book an accommodation of your choice.

People normally club together Leh Palace and Taglang La while planning their visit to Lamayuru Monastery.

People also prefer to start their day with Lamayuru Monastery.