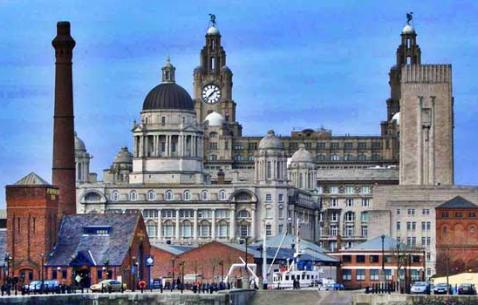 The Beatles, the popular Liverpool Football Club, crazy nightlife and a fabulous history- that is exactly what Liverpool has to offer to its visitors and even more to its fans! One of the most visited cities in the U.K, Liverpool is a city in almost every traveler’s itinerary.

The foundation of the city was laid down in 1200s and by the 1500s Liverpool was still in its initial stages of development in England. The original map of Liverpool shows 7 streets laid out in the shape on an ‘H’ which still exist- Castle street, Dale street, Chapel Street, Bank street (Water street), Juglar street (Presently known as High Street), Whiteacre (Presently known as Old Hall) street and Moore street.

19th century made Liverpool a quick developing city flourishing in trade which is showcased in its architecture and buildings while the 20th century ushered in the damage of the Second World War as the city was subjected to air-raids.

However what really put the city in UK on the map was its vibrant art scene. The 1960’s ushered in the phenomenal music of The Beatles which soon became American favorite and still is a popular culture all around the world.

Today, the city which has every aspect of culture, uber cool attractions, classic historic pulse and an urban heartbeat which is a perfect for the tourist looking for a 21st century heaven!

Liverpool thrives on tourism, based more on its contribution to the world- the art, popular music and national museums. The warm hospitality and the locals only add to this experience.

Whether you want to visit the place for the Beatles experience, for its art galleries, for pub-hopping or simply to experience its rich culture and fast-paced life, Liverpool has something to offer on your every visit!

Essential travel information and Liverpool tips for your visit

Plan Your Trip To Liverpool

The best tours and activities in the city, guided by experts to give you a local insight to the best of Liverpool