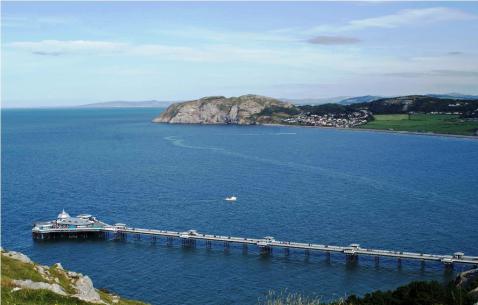 The pronunciation of Llandudno is based on the name of Saint Tudno, where ‘dud’ is pronounced as ‘did’. It also includes several neighbouring townships such as Craig-y-Don, Llanrhos, and Penrhyn Bay. St.George’s Harbour & Railway originally planned to name Llandudno as Port Wrexham, because they wanted to develop this region and make it a base for coal export.

Llandudno is a beautiful, breath taking seaside resort - town in North Wales, where Snowdonia meets the sea. This prehistoric town developed from Stone Age, then went into Bronze Age and over the years the Iron Age Settlers made their home on the slopes of the limestone headland known as the Great Orme.

The Great Orme has 4 miles of manmade copper mine tunnels which are over 4000 years old and some were so small in size, that only a child could pass through to dig. There are 9 levels to this mine but only 2 levels are opened to the tourists and the rest is under excavation much to the delight to the archeologists.

The ancient geographical boundaries of Llandudno, include the Irish Sea and the River Conwy which greatly enhances the beauty of this tourist resort. She is divided into the North shore and the West Shore.The North shore is home to a lot of entertainment and amusement parks.  It is two mile long and extends into a curve between the headlands of the Great Orme and the Little Orme.

The wide Victorian Promenade on the North shore is open to pedestrians and cyclists, and it leads to the Parade, which has a different name for each block and its own parades. Almost every day there are new attractions on the beach which keeps everyone enthralled – a staple of tours to Llandudno.

Lord Mostyn planned to develop Llandudno in 1848, change it from marsh lands to a holiday resort. He had a great influence in building this resort, thus streets are named after him. Mostyn Street, Mostyn Broadway, and Mostyn Avenue are all behind the Promenade .These are the main shopping areas, and are lined with churches, building societies, banks, public library and shopping malls. The West shore is a quiet beach on the estuary of the River Conwy.

Children can play in an area by the beach where there is a small pool of water with delightful ducks and swans in it.The award winning pier which was built in 1878 at 2,295 feet allows you to see the mountains of Snowdonia rising over the town. Attractions on the pier include a bar, café, arcades, shops and kiosks. The majestic gardens at Happy Valley were restored and remain a major attraction. The cable car and tramway are perfect ways to travel to the museums in Llandudno. One such museum is called the Home Front Museum and the other Llandudno Museum.

A trip to Llandudno is a nature lover’s dream. It is home to various seagulls, peregrine, falcons, cormorants, razorbills, puffins, kittiwakes, fulmers and is an ideal place for other nesting birds as well. Even rare flowers and insects have evolved and survived weather changes over the years and now find comfort in living in the Great Orme. There are some excellent campsites scattered about Llandudno – indeed, camping is a favourite local pastime.

The Llandudno Sailing club, Llandudno Yacht club, North Wales Theatre and the north Wales Conference Centre are all located near the Llandudno Bay. There are a wide range of hotels and restaurants all over Llandudno. Tourists can check into lodges and cottages as well. Llandudno is surrounded by mystery in the form of caves, rock pools, and all the places to visit in Llandudno are mystical.

Essential travel information and Llandudno tips for your visit

If you want to travel further ahead and see the breath taking North Wales countryside, the following options are available;

Plan Your Trip To Llandudno

The best tours and activities in the city, guided by experts to give you a local insight to the best of Llandudno