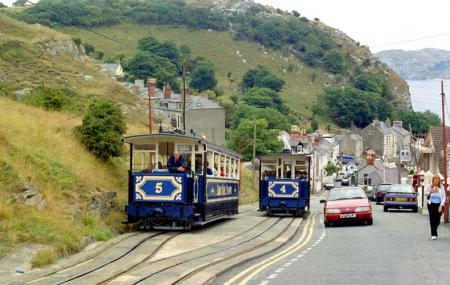 Over a hundred years ago, a wooden tramcar started on a journey through a wild windswept plateau and entered into a wonderland of dynamic nature. Today one can take a trip in the Great Orme tramway and experience an exhilarating and invigorating ride out into a breath taking and magnificent countryside.

Wide open windows allow you to breathe the exceptionally pure air and rest your eyes on acarpet of grassland and rare flowers, creating a spectacular display of colour. It rises slowly through craggy limestone cliffs and makes its way through grandeur views of hazy mountain ranges with the sun shining brilliantly at the top.

The Great Orme Tramway hasa rich history and with it is the story of its rare flora and fauna.There are two varieties of butterfly which are unique to the area, the wild Kashmir goats exclusive to the Great Orme and theOrme’s beautiful, rare flowers.

The Tramway is controlled from the engine house at the Halfway Station. There are two attendants who keep a look out on the upper section since the track goes over an open hillside and can be crossed by the public and animals at any point.

The tramcars were each named after a local Welsh Christian Saint, and had been lovingly restored over the years.The tramway was opened in its two stages: the lower section on 31 July 1902 and the upper on 8 July 1903. By 2001 the entire Halfway Station, its control room and its power plant were completely rebuilt and re-equipped.

The tramway has three main stations, a lower station named "Victoria” a middle one aptly named 'Halfway', and the Great Orme Summit station. Passengers must change trams at the Halfway Station as upper and lower funicular sections are physically separate.

A ride on the tramway magically lifts your spirits, but there’s so much to do on the Great Orme.

How to Reach Great Orme Tramway

Love this? Explore the entire list of places to visit in Llandudno before you plan your trip.

Fancy a good night's sleep after a tiring day? Check out where to stay in Llandudno and book an accommodation of your choice.

85.86% of people prefer to travel by car while visiting Great Orme Tramway

People normally club together Llandudno Museum and Great Orme Copper Mine while planning their visit to Great Orme Tramway.