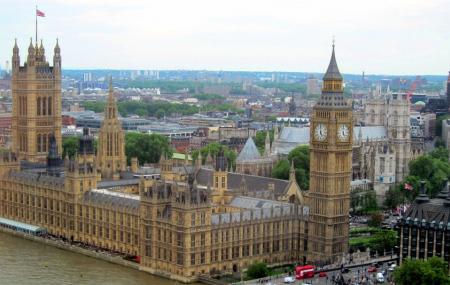 Big Ben is actually a nickname for the 13 ton, 96 metres tall world famous bell and clock tower in London. Big Ben was built in 1859. Big Ben located at Elizabeth Tower, the north end of The Houses of Parliament in Westminster, Central London, beside the river Thames.The Big Ben Clock is the second largest (four faced) chiming clock in the world. (The largest is at the Minneapolis City hall in the United States). The Big Ben tower is also therefore referred to as the "Clock tower". One other common name to refer the Big Ben tower is St Stephen's Tower. In 2012, to celebrate the Diamond Jubilee of Queen Elizabeth ||, the tower was officially renamed as Elizabeth Tower.

London has quite a few historic, iconic and unforgettable buildings but none more so than the Big Ben. This Huge Big Ben is famous for the giant 13 ton resounding bell that is inside the clock tower that incidentally also gives it its name; Big Ben. Best time to listen Big Ben is at noon, that time large bell chimes 12 times. Big Ben chimes every 15 minutes and sound can be heard from as far away as 5 miles.

In the early 1800s, The Palace of Westminster used wooded Tally sticks as a part of accounting procedures. The wooden tally sticks were used until 1826. On 16th October 1834 the Sticks were carelessly disposed in the furnaces under the House of Lords. This caused a large fire outbreak which nearly destroyed the Palace of Westminster. Only few parts of the building survived. The Westminster Hall built in the early 1000s survived.

In the year 1844, while the new buildings were being constructed for the Westminster Palace, it was decided by the Parliament to construct a tower and a clock. The architect Charles Barry was awarded the commission for this work. George Airy, the Astronomer Royal at that time drafted the exact specification of the clock.

One key specification fixed by George Airy was that "... the first stroke of the hour bell should register the time, correct to within one second per day, and furthermore that it should telegraph its performance twice a day to Greenwich Observatory, where a record would be kept."

The Big Ben: 4 quarter chimes(Big Ben coordinates) and one large bell were built by John Warner & Sons. The Large Hour Bell is called the Big Ben.

In August 1856, a 16 ton Bell (The Hour Bell) was cast at Stockton-on Tees. The Hour Bell, as per Airy's specification, was the largest bell ever cast in England. Also the Metal alloy used to build this bell was never used before for bell casting.

The Bell was transported to London in a Trolley. 16 Horses were needed to draw the cart. The tower construction had not finished. The Bell was hung in the Palace Yard for testing. During the testing, on 17 October, 1857 a long crack (Almost 4 foot long) developed in the Bell. A new bell had to be cast.

The Second Bell was cast by Whitechapel Bell Foundry. On April 10th 1858, the "second Great Bell" - the official name of Big Ben - was cast. This second bell was 13.5 tons in weight and thus relatively lighter.

The Tower construction finished by 1859 and the clock became operational by May 31st 1859.

The Big Ben Developed a crack in Sept 1859. The Big Ben was not used for the next 4 years. It was finally decided by Airy that instead of rebuilding a new bell, the cracked bell was to be turned so that the undamaged part of the bell would be struck by a smaller hammer. A small square cut was made in the bell to stop the crack from spreading. This operation was completed in 1863.

The Crack in the bell exists even today!

The Clock pendulum accuracy of the Big Ben clock is maintained by adding pennies on the shoulder of the pendulum. The Clock has suffered only one major break down. Even the bombings of London in World war 2 when the House of Commons was destroyed, the clock continued to function accurately.

When the House of Commons is sitting, a light is lit on top of the Big Ben tower.

The Name Big Ben is most likely after Sir Benjamin Hall, First Commissioner for Works, whose name is inscribed on the bell. Another common theory to explain the name is that the Big Ben is named after Ben Caunt, the heavy weight boxing champion of the year 1857

Only UK citizens sponsored by Members of Parliament or Members of Parliament can visit the Elizabeth Tower (Big Ben Tower) from the inside. There are daily 3 tours that take limited individuals through the 334 stairs of the Elizabeth tower. The tour is available everyday at 9 am, 11 am and 2 pm. Visitors can here the bell strike and can also see the mechanism room and learn how the clock works. One can also get a view of London from the 62 meter height of the tower.

The View of the Big Ben from the Shard building is also beautiful.

Some questions which all tourist ask about Big Ben London are - Can you go in Big Ben? When was big ben built? Yes you can visit Big Ben but only if toursit fit a strict criteria and have contacted their MP or a member of the House of Lords to request a visit and it was built in 1859. Big ben Tours are booked in advance. Also How many clock faces are there on Big Ben, Who invented Big Ben all these question are raised by tourist.

A trip to London can hardly be said to be complete without taking pictures near and around the Big Ben London; so much so that the Big Ben has now become the symbol of London tourism and known for best thing to do in London. The tremendous importance of the monument to the identity of London aside, it is also very beautiful and there is no chance that anyone could be disappointed to see this iconic place as there are many things to do near big ben.

Below is the list of Metro Stations at walking distance from Big Ben:

How to Reach Big Ben London

Love this? Explore the entire list of places to visit in London before you plan your trip.

Fancy a good night's sleep after a tiring day? Check out where to stay in London and book an accommodation of your choice.

73.34% of people prefer to travel by car while visiting Big Ben London

People normally club together London Underground and The London Eye while planning their visit to Big Ben London.