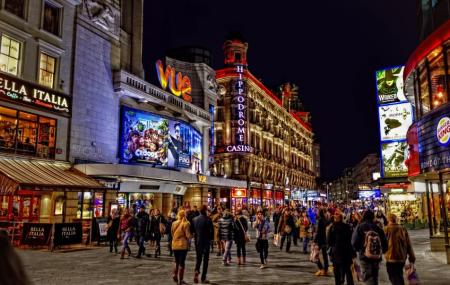 It is a pedestrian only square in the heart of London’s West End. Leicester Square is the entertainment hub of London and one of the most popular tourist areas with bustling entertainment and nightlife into the wee hours of the morning.

London’s famous Odeon cinema theatre with a seating capacity of over 1600 people and one of the largest screens is located here and and is known to have held the premiers for some of the most famous movies. Several Hollywood stars have walked the red carpet here. The London Film Festival is also held here annually.  The Empire theatre, Odeon West End and Vue West End are also located here.

The Hippodrome Casino, Casino at the Empire and G Casino are also located at the Square along with several trendy nightclubs, bars and over 30 restaurants. Several festivals and public events are held at Leicester square annually. You will also find street performers and artists along the area. Tickets for popular West End shows are sold at the TKTS booth here.

The famous M&M World and Ripley’s Believe It or Not are a great place to visit with kids.

How to Reach Leicester Square

Love this? Explore the entire list of places to visit in London before you plan your trip.

Fancy a good night's sleep after a tiring day? Check out where to stay in London and book an accommodation of your choice.

54.17% of people prefer walking in order to reach Leicester Square

People normally club together Piccadilly Circus and Regent Street while planning their visit to Leicester Square.