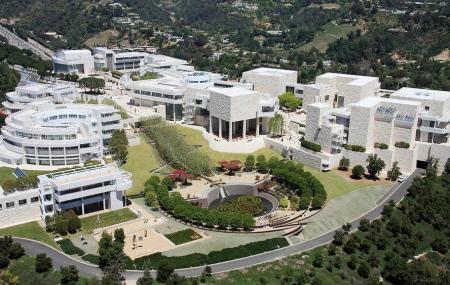 J. Paul Getty Museum or just The Getty is one of the most famous art museums in California. The museum is located on two campuses called The Getty Center and The Getty Villa in Los Angeles. The main museum is of the J. Paul Getty Center in the Brentwood neighborhood. This museum has a vast collection of artworks from the Middle Ages to the present. While another museum which is located in the Getty Villa in Malibu neighborhood showcases brilliant art pieces from Greece and Italy. The museum witnesses over 2 million visitors every year and has been featured in the New York Times as well. You can purchase the Getty Museum tickets online or at their office.

The Getty Center is one of the two campuses of the Getty Museum located on 1200 Getty Center Drive in Los Angeles, California. The center has a huge collection of the European and American Art from the medieval period to the present. It also organizes exhibitions on photography, pastel portraits, Renaissance art and more. The 134,000-square-foot central garden is also a point of attraction at the Getty Center.

Another campus for the Getty Museum is the Getty Villa which is located on 17985 Pacific Coast Highway, Pacific Palisades in California. Here, one can discover a collection of marvelous ancient art that unfold the cultures of 7000 years from the Stone Age to the decline of Roman empire. The Getty Villa, itself, is a great piece of art and is basically an ancient Roman country house. At every corner of the villa, one can see ancient models and artworks.

How to Reach The J Paul Getty Museum

93.64% of people prefer to travel by car while visiting The J Paul Getty Museum