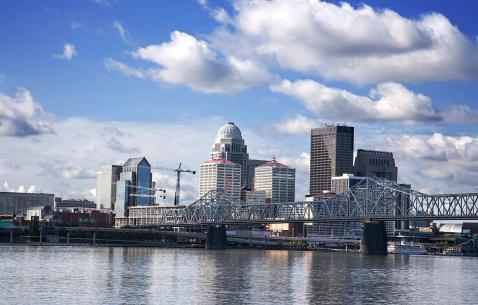 Louisville – home to adrenaline pumping Kentucky Derby races, Fried Chicken, Victorian Houses, curious Museums, active nightlife and soul-food cuisine, casts a spell on anyone who visits. Add to do its fresh nature spots, urban places and warm people, and the combination is sure to make you extend your stay!

The city’s history dates back to its foundation in 1778 and derives its name from King Louis the XVI of France (a thankful gesture for the King’s help during Revolutionary War). Soon Louisville spurted a wavelength of its own and in the 19th century the small town transformed into a major shipping port and a crucial place on the trade route map. In spite of America’s Civil War period, the town of Louisville stayed away from the burn of the war. The century also marked the town as a breeding center for horses- supporting its famous Horse-racing tradition.

Today Louisville wears its traditions, history and architecture proudly while keeping up with the 21st century. Whether you want to time-travel and take a walk through the Old Town or want to have a good time at its modern-day hubs, the city guarantees a good time! The Downtown is Louisville’s highlights- museums, galleries, pubs, parks- you name it and downtown has it! And for others who want to see the virgin part of Louisville, the hilly terrains are a welcome escape through the woods.

Tourism in Louisville is owned to its 19th century influences- highly maintained museums, popular annual festivals, electric performing arts, love for sports and its loved-by-all Indie music scene. Arts is second nature to Louisville and more often than not, you will come across innumerable galleries during your walks through the city. The old-world transport system like the colorful Trolleys which meander through streets that hug the 19th century buildings adds to the ‘quintessential Louisville experience’.

Essential travel information and Louisville tips for your visit

Plan Your Trip To Louisville

The best tours and activities in the city, guided by experts to give you a local insight to the best of Louisville