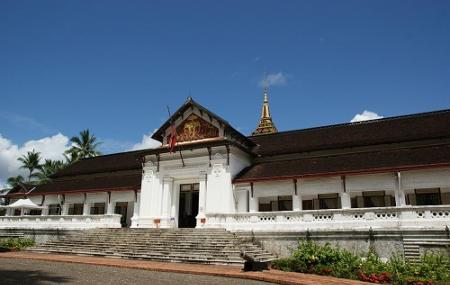 The Royal Palace, officially known as Haw Kham, was built in the year 1904 and was the royal residence of the kings and queens of Laos. However, in the year 1975, monarchy was overthrown in Laos and since then, this place has been converted into a museum. The architecture is a blend of traditional Lao motifs and French Beaux Arts styles. Some of the buildings in the royal campus, apart from the palace, are The Kitchen/Storage, The Royal Barge Shelter, Conference Hall, Haw Pha Bang and Staff headquarters. One of the most visited places here is the throne room which is beautifully decorated with gems imbedded in the walls. Another interesting piece of art that you will find here is moon rock, that was presented by US President Richard Nixon to the King of Laos.

How to Reach Royal Palace Museum

Love this? Explore the entire list of places to visit in Luang Prabang before you plan your trip.

Fancy a good night's sleep after a tiring day? Check out where to stay in Luang Prabang and book an accommodation of your choice.

86.67% of people prefer to travel by car while visiting Royal Palace Museum

Half Day Private Car and Guide (within the city, 4 H) New on TripHobo 4 Hrs
FromUSD 102 Book Now
Save 4%