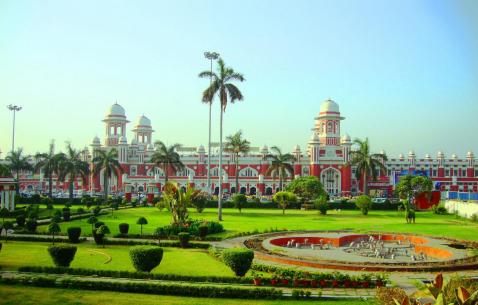 Lucknow, the capital of Uttar Pradesh and the magnificent and poignant city of Nawabs. The city which believes in tehzeeb- as in politeness and adab- as in grace. The place is a treat for history buffs and anyone who would like to indulge in the old world charm without the din of the present day tourism. The whole city is replete with parks, gardens and Mughal architecture ranging back to the British era. It is a small humble city which has a plethora of goodies to offer in terms of its richness in food and culture.

The city is known to be that of Nawabs, who were great patrons of culinary and other arts, including dance and music. They were known to be grand and sophisticated people, who’d revel in good food, music and dance forms, patronize and encourage it. They built monuments and mausoleums, with vivid handcraft and architectural patterns, that are a sight to behold till date.

Situated at the banks of river Gomti, it is a peaceful city, which shows contrasting colors in the modernity of its posh areas and the mysterious old world charm of its ancient areas. It is renowned in the world for the lavish and exquisite variety of food that it serves, right from the main course to desserts. It is a must visit for anyone who is interested in exploring the old world and knowing more about its intricacies.

Essential travel information and Lucknow tips for your visit

Tipping: It is not expected of people to tip, but it is no doubt appreciated.

Plan Your Trip To Lucknow

The best tours and activities in the city, guided by experts to give you a local insight to the best of Lucknow