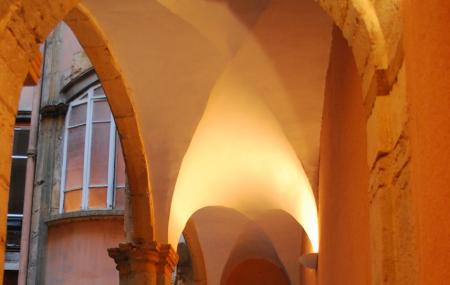 Hidden away from the Lyon public are a secret world of covered passageways, alleys that silk merchants would use to safely pass their goods around Lyon. Indeed, the word traboules, in Latin, means to pass through. They were immensely valuable to the city’s main industry, textiles, as they offered an easy way to move about for almost 90000 silk workers.

The traboules also played an important role in sparking off the Canute revolt. Workers who wanted a fixed lower limit for their craft tried to negotiate with the major manufacturers. Negotiations failing, the workers revolted and used the traboules to move through the city and some heavy duty bloody fighting went down in November 1831.

They also had another unexpected use: for the movement of the resistance during WWII. There are over 400 of these, running mostly through Vieux-Lyon and Croix-Rousse districts but only a select few of those exciting passageways are open to the public.

The publicly accessible traboules can be found as follows:

Love this? Explore the entire list of places to visit in Lyon before you plan your trip.

Fancy a good night's sleep after a tiring day? Check out where to stay in Lyon and book an accommodation of your choice.

77.92% of people prefer to travel by car while visiting Traboules Du Vieux Lyon