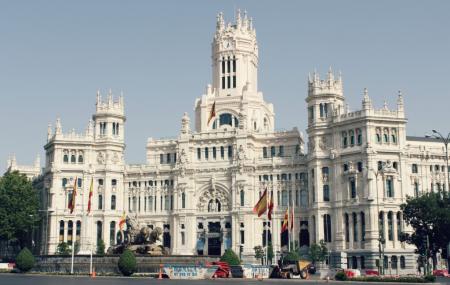 The Plaza de Cibeles is a heritage architecture and historical site of the province of Madrid. The site has a scenic view of four separate buildings and the famous fountain known as the Cibeles Fountain. The layout and design of the Plaza is based on the classical Roman architecture and consists of four distinct sections of buildings, which had been built in such an order that they are situated in three neighbouring districts- namely Centro, Salamanca, and Retiro. The Fountain of Cibeles- the Goddess of fertility of Rome, is an illustration of the Goddess Cibeles upon her chariot, which is being towed by two lions. The Cibeles Palace is indubitably the best prettiest building of the Plaza de Cibeles, and it resembles a cathedral in its design. It is also well known as the Madrid City Hall. The site is perfect for a leisurely stroll and is flocked by countless soccer fans as the fountain has been adopted by the famous football club Real Madrid.

Also, visit nearby attractions which are covered in Madrid itinerary 3 days.

How to Reach Plaza De Cibeles

Love this? Explore the entire list of places to visit in Madrid before you plan your trip.

Fancy a good night's sleep after a tiring day? Check out where to stay in Madrid and book an accommodation of your choice.