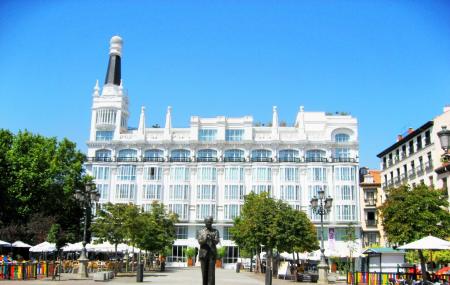 This Plaza specializes in its immense diversity of collections, which includes the Gothic monuments of Madrid and the grand heritage theatre of the Teatro Espanol. The Spanish writers of the Golden Age of literature of Spain, namely Pedro Calderon de la Barca and Federico Garcia Lorca and their works are both highly illustrated in the Plaza of the Santa Ana.

The plaza also includes several restaurants and cafes, besides terraced bars and facilitated resting units. The Teatro Espanol bears the cultural heritage of Spain since the 17th century. Besides, a new luxurious and facilitated hotel for tourists, known as the ME Madrid Reina Victoria, is highly favoured by the bullfighters. The Plaza also houses numerous appetizer bars.

Also, visit nearby attractions which are covered in Madrid itinerary 7 days.

Love this? Explore the entire list of places to visit in Madrid before you plan your trip.

Fancy a good night's sleep after a tiring day? Check out where to stay in Madrid and book an accommodation of your choice.