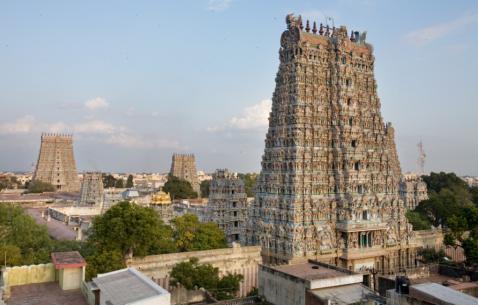 Madurai, the 3rd largest city in Tamil Nadu; the city of temples, vibrant culture and an intense and rich history has carved its own unique place on the world map. Many rulers, dynasties, and kingdoms have always been attracted to Madurai across centuries- from the Kalabhra, Pandyans, Chola Dynasty, the flourishing Nayak rule to the British Rule in 1801. The city even finds its name highlighted in Greek and Roman documents!

Madurai’s layout is intriguing. The Meenakshi Temple forms the center of the city around which streets are arranged in concentric quadrangles. The ancient architecture is best seen in the city’s timeless temples and the caves which are located on the outskirts.Madurai is most famous for inspiring Mahatma Gandhi to adopt his iconic style of clothing, inspired by the farmers who were working in the fields when Gandhi visited the city. The city holds a piece of the blood-stained garment worn by Gandhi when he was assassinated.

Today, Madurai,eventhoughnot a capital of Tamil Nadu, still maintains a subtle importance with its ancient history and modern IT center. The city is known as ‘the city that never sleeps’ and shines its best during the 10 day MeenakshiTirukalyanam festival.

For the travel lovers, Madurai is simply witnessing India in one of its best avatars- culture, art, architecture and ancient history, all spun to together seamlessly.

Owing to historic sights in the city and its rustic charm along with an urban life, tourism in Madurai has flourished and the city is a must-see for anyone who wants to experience South- India.

Essential travel information and Madurai tips for your visit

Plan Your Trip To Madurai

The best tours and activities in the city, guided by experts to give you a local insight to the best of Madurai