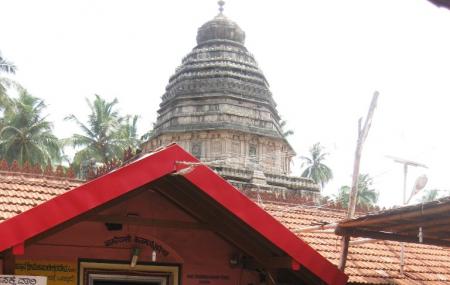 The temple is enclosed by a 5 feet wall and is divided into two areas, the inner and outer rooms. The inner room or the sanctum sanctorum has Shiva as its presiding deity, with a black stone lingam known as Swayambhu, which is the 500 years old self-originated lingam and is enshrined within the sanctum sanctorum. This self-originated lingam is in the shape of Rudraksha and is called Mahalingam, which is considered to be superior to the twelve Jyothir Lingams (stone incarnation of Lord Shiva) as its central figure. You'll find several carvings of Shiva's vehicle, the sacred bull and Kalbairav, his bodyguard. The temple also houses Shiva's bed, damru and trishul, dating back 300 years. Legend has it that the bed used to be crumpled in the morning, indicating Shiva's presence during the night at the temple. An important temple on any Shiv-bhakt's pilgrimage plan, this temple has a serene, tranquil ambience that will transport you to higher realms of spirituality. The main draw is the ancient Mahabaleshwar Temple with its 6-foot-tall linga, of which only the tip can be seen.

According to the legend, the Maratha ruler, King Shivaji weighed his mother Jijabai in gold at this platform and then gave away the gold in charity. Also, visit the popular attractions in the city by following Mahabaleshwar Itinerary 3 Days.

How to Reach Mahabaleshwar Temple

Love this? Explore the entire list of places to visit in Mahabaleshwar before you plan your trip.

Fancy a good night's sleep after a tiring day? Check out where to stay in Mahabaleshwar and book an accommodation of your choice.

93.25% of people prefer to travel by car while visiting Mahabaleshwar Temple

People also prefer to start their day with Mahabaleshwar Temple.