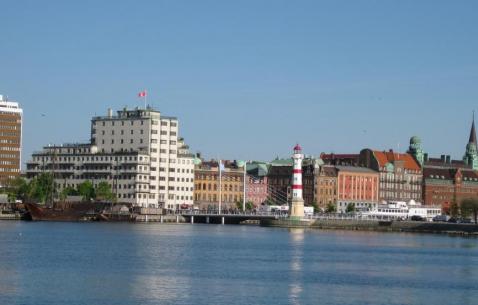 Malmö (IPA /ˈmælmə/; Swedish pronunciation: [²malːmøː] ; Danish: Malmø) is the third largest city in Sweden and the 6th largest in the Nordic countries. Malmö is also the most populous city in Scania and is the economical and cultural centre of South Sweden. Malmö is also an important part of the transnational Øresund Region, which covers Denmark east of Great Belt (including Copenhagen) and Scania. Malmö was one of the earliest and most industrialized towns of Scandinavia, but it struggled with the adaptation to post-industrialism. Since the construction of the Øresund Bridge, Malmö has undergone a major transformation with architectural developments, and it has attracted new biotech and IT companies, and particularly students through Malmö University, founded in 1998. The city contains many historic buildings and parks, and is also a commercial centre for the western part of Scania. The administrative entity for most of the city is Malmö Municipality which, as of 31 March 2013, has 309,105 inhabitants in eight different localities. Malmö is also a bimunicipal locality, as part of it is formally situated in Burlöv Municipality. The total population of the urban area was 280,415 in December 2010.

Looking for travel information about ? Explore the best travel advice on , . To explore , set aside 1 to 2 number of your days. You'll be coming back for more!

Don't just take a trip, let the trip take you! Have a enjoyable time at .

Plan Your Trip To Malmo

The best tours and activities in the city, guided by experts to give you a local insight to the best of Malmo