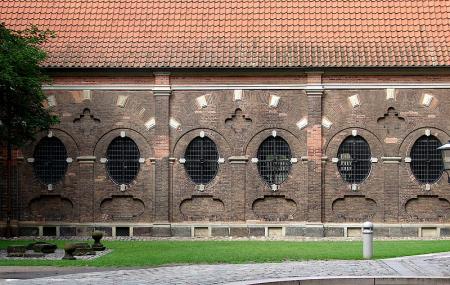 The Sankt Petri Church is over 400 years old and is the oldest building in the inner circle of the city. The church is located in the Latin quarters and was established to serve the German speaking population of the city. The church is dedicated to Saint Peter and finds its first ever mention in the middle ages with the oldest parts of the church dating back to the mid 15th century! The architecture style of the church has always been changing and in the 1860’s after the fire of Copenhagen, the place was re-designed by architect HC Stillingin in Neo-Gothic style.

The story of Johan Friedrich Struensee plays an important part in the mystery attached to the church. Struensee was a German who came to Copenhagen as a physician to King Christian VII. He was an atheist and had never visited a church in his life. After his affair with Queen Caroline Mathilde was out in he open, Struensee was sentenced to death. It is believed that the bones placed in the crypt of the church belong to him. The burial vaults also is the final resting place of many citizens including Danish royalty.

On a lighter note, the church’s interiors are loved for their golden embellishments, a central chandelier that hangs over the main alter and the exquisite altar itself that consist of a painting.

How to Reach Sankt Petri Kirche

Love this? Explore the entire list of places to visit in Malmo before you plan your trip.

Fancy a good night's sleep after a tiring day? Check out where to stay in Malmo and book an accommodation of your choice.