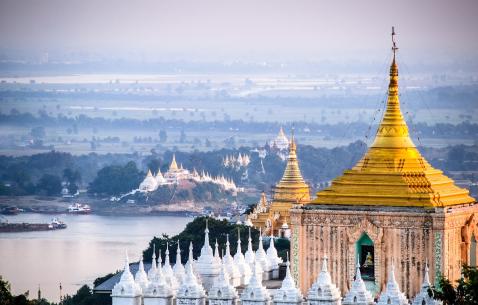 Relatively a newer city when you compare it with other cities of Burma such as Bagan, Mandalay was founded in 1857 on the behest of King Mindon who wanted a city on the foothills of Mandalay hill. His plan called for a 144-square block grid patterned citadel, and a 16-square block royal palace compound standing adjacent to the Mandalay hill. And thus, Mandalay was formed as we see it today. The second-largest city and the last royal capital of Myanmar, Mandalay has always been a centre of attraction for tourists who love to immerse in its historicity. Today, this city might have become an Asian cosmopolitan metropolis, its traditional roots are still visible in the most enmeshed manner.

Walking through the busy and bustling lanes of this city, you will come across several monasteries, pagodas, workshops and teahouses peeping through the present-day buildings. Politically also, the city has much to say. It has served as the capital of the last independent Burmese kingdom after it was colonized by the British imperial forces. Located on the east bank of the Irrawaddy River, Mandalay comes across a city trying to evolve itself in the present modern world of speed and nightlife. The city was heavily destroyed during the World War 2 but was soon reconstructed with effort. While you might be expecting of Mandalay as strongly historic, it is its modernity that glares hard on your face as you enter and explore it. There are modern establishments, hotels and buildings that add a glittery element to the city.

Essential travel information and Mandalay tips for your visit

Plan Your Trip To Mandalay

The best tours and activities in the city, guided by experts to give you a local insight to the best of Mandalay