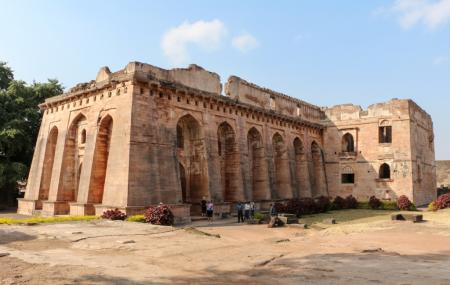 The Hindola Mahal in literal English means the swinging palace. It is located in the ruin city of Mandu in Madhya Pradesh and is a part of the palace complex of Mandu. It was built during the reign of Hoshang Shah according to some sources but on the other hand some say that it dates back to the reign of Ghiyas-ud-din. It was used then as a durbar hall to host royal audiences. The companions of this monument in the same complex are the Tawili Hall and the Nahar Jharokha.

The Hindola Mahal is of an exclusive T shape with thick walls on all sides. The monument has one large hall and the walls here are quite inclined thus giving it the unique name. The walls also help in ensuring that the outer walls do not exert pressure due to their inclination on the inner walls. Each side has 6 pillars each which make arches and have doors in the lower part. The windows are all made of the ancient stone work designs that were made to let abundant light and air come inside the hall.

How to Reach Hindola Mahal

Love this? Explore the entire list of places to visit in Mandu before you plan your trip.

Fancy a good night's sleep after a tiring day? Check out where to stay in Mandu and book an accommodation of your choice.

83.93% of people prefer walking in order to reach Hindola Mahal