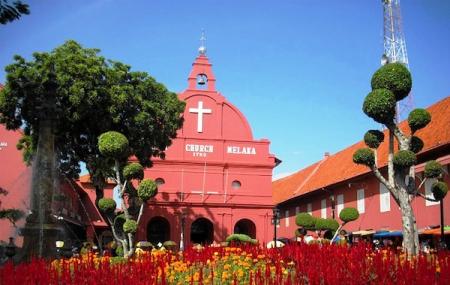 The Stadthuys, also known as the Red Square, is a historical structure situated in the heart of Melaka/Malacca Town, the administrative capital of the state of Melaka/Malacca, Malaysia. It was built by the Dutch occupants in 1650 as the office of the Dutch Governor and Deputy Governor.

When Melaka/Malacca was handed over to the British in the 19th century, the Melaka/Malacca Free School was opened in the vicinity of the Stadthuys on 7 December 1826, by missionaries residing in the state, in response to a letter dated 19 April 1825, signed by a J. Humprey, J. W. Overee and A. W. Baumgarten, which called for an English institutional education to be built in Melaka/Malacca.

The school which the British provided free education to residents was eventually renamed Melaka/Malacca High School in 1871 upon a takeover by the British government, and moved out to its present site at Chan Koon Cheng Road in 1931.

Situated at Laksamana Road, beside the Christ Church, the supposed oldest remaining Dutch historical building in the Orient is now the home of a Museum of History and Ethnography. Among the displays in the museum are traditional costumes and artifacts throughout the history of Melaka/Malacca, which makes it Melaka/Malacca's premier museum.

Just behind the Stadthuys is the Museum of Literature where historical accounts and local legends are detailed in maps, prints and photographs. One admission ticket allows visitors entrance to both exhibits.

Entrance Ticket Details For The Stadthuys

How to Reach The Stadthuys

Love this? Explore the entire list of places to visit in Melaka before you plan your trip.

Fancy a good night's sleep after a tiring day? Check out where to stay in Melaka and book an accommodation of your choice.

54.25% of people prefer walking in order to reach The Stadthuys

People normally club together Cheng Hoon Teng and Kampong Kling Mosque while planning their visit to The Stadthuys.