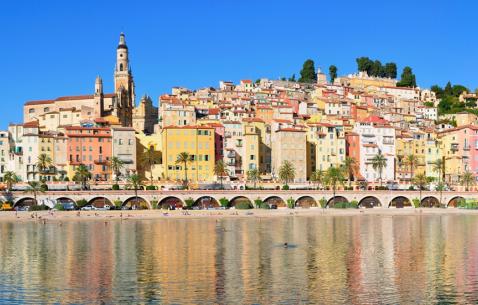 Situated in the French-Italian border, Menton is a commune in the Provence-Alpes-Cote d'Azur in Southeast region of France. More Italian than French in ways, it provides home to about 29,000 people.

Menton has been a habitat since the age of Palaeolithic age and said to have traces of the Cro-Magnons and Neanderthals. But the first major settlement dated back to the 13th century. Menton was ruled by the princess of Monaco until the French Revolution since its acquisition by Charles Grimaldi in 1348, after which it became a part of the First Empire in France. After a series of annexations and invasions, Menton finally became a place visited by Northern Europeans with TB in order to regain their health or die in the nineteenth century.

A beautiful land located in the French Riviera near the Mediterranean Sea across the town of Ventimiglia, this old town is famous for the cemeteries of noble English men, its pretty gardens, beaches, ancient markets and unique architecture. A number of people rush in every year to visit what is fondly called as the Pearl of France. Explore Menton tourism on your next vacation and know more about this enticing city!

Essential travel information and Menton tips for your visit

Plan Your Trip To Menton

The best tours and activities in the city, guided by experts to give you a local insight to the best of Menton