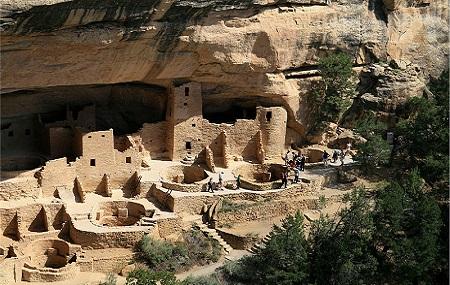 The Cliff Palace at Mesa Verde National Park can be accessed by taking the Cliff Palace loop road. The dwellings were made by ancestral Puebloans and are estimated to date back to 1190 CE- 1260 CE. The settlement uses natural terrain to shade their homes and it is believed since the area faced a drought, it was abandoned in 1300. The palace area was accidentally discovered by Richard Wetherill and Charlie Mason in 1888 and since then it has become one of the prized attractions of the Mesa Verde National Park.

The Palace consists of 150 room and 23 kivas that would be able to accommodate around 100 people. All the cliff dwelling includes a total of 600 homes that cover the periphery of the national park and have a maximum of 1-5 rooms. The doorways of the cliff palace and cliff dwellings were particularly smaller than what we see today- indicating that the average man at the time was as tall as 163 centimeters while the average woman would be 152 centimeters in height. These heights match with the average height of the European men and women during that time. In general, the mortality rate was pretty high- a little more than 30 years was the general lifespan while around half of the children born here died before they completed 5 years.

A walk here and you can see that the construction of the houses was done by using sandstone (cut and shaped by using harder stones), mortar and wooden beams. Tiny pieces of stones called ‘chinking’ were used to fill the gaps in the walls and provided enforced stability before the walls were plastered in colours of pink, red, brown, white or yellow.

Other highlights of the cliff palace include:

Over the years many scientists and archaeologists have tried to figure the importance of the palace and it is believed that this was a social, administrative and ceremonial space used by not just the communities of the Mesa Verde park but also other surrounding clans. A hike through the settlement is truly a surreal experience that is best explored by taking a guided tour.

Admission Fee to the park for private vehicles (valid for 7 days):

Admission Fee to the park for Motorcycle (valid for 7 days):

Admission Fee to the park for every Bicyclist and Individual (valid for 7 days):

Admission Fee to the park for Non-Commercial Group (based on vehicle capacity): May 1 – October 31, 2018: valid for 7 days

How to Reach Cliff Palace

Love this? Explore the entire list of places to visit in Mesa Verde National Park before you plan your trip.

Fancy a good night's sleep after a tiring day? Check out where to stay in Mesa Verde National Park and book an accommodation of your choice.