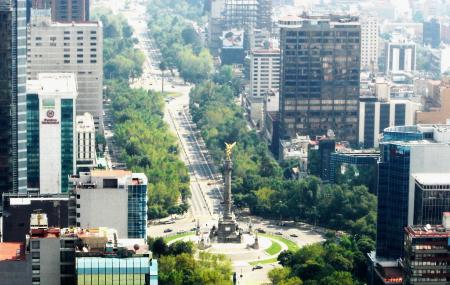 Paseo De La Reforma - An Avenue in Mexico City, Mexico. This avenue of commere was brought about by an Emperors wish. He wanted to connect Chapultepec Castle with the National Palace. Passing through some of Mexico’s City’s most important landmarks and monuments, a drive or eve a walk along this road is a good way to spend a day.

The monuments include the Nino’s Heroes, a statue of the Diana (Roman goddess of the hunt), the Angel of Independence and the massive Revolution monument.

You’ll pass by the Museum of Anthropology, the Modern Art Museum and the Chapultepec Zoo. And don’t forget the many restaurants. The road is also a highly popular gathering ground for rallies and at the El Angel roundabout; the victories of the national football team are frequently celebrated.

On Sundays, the road s closed to vehicles, becoming a weekly boon to runners, bikers and pedestrians and the roads will even line up with medicos ready to tend to those who might injure themselves in exercise. Best way to do this road then, is to cycle.

Love this? Explore the entire list of places to visit in Mexico City before you plan your trip.

Fancy a good night's sleep after a tiring day? Check out where to stay in Mexico City and book an accommodation of your choice.

93.23% of people prefer to travel by car while visiting Paseo De La Reforma

People normally club together National Museum Of Anthropology and Chapultepec Castle while planning their visit to Paseo De La Reforma.