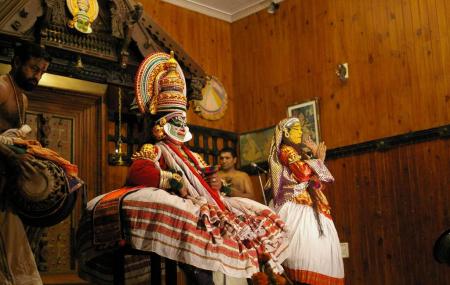 Witness rich and varied tradition and cultural heritage of Kerala at the Punarjani Traditional Village. Listen to the percussion instruments used for Kathakali. Watch dancers perform magic on stage in unison. Kathakali is the most well-known dance drama from Kerala. The word Kathakali literally means "Story-Play".  It is known for its large, elaborate makeup and costumes. The elaborate costumes of Kathakali have become the most recognised icon for Kerala. The themes of the Kathakali are religious in nature. Kathakali has a long tradition dating back to the 17th century.

The actors rely very heavily on hand gesture to convey the story.  These hand gestures, known as mudra, are common throughout much of classical Indian dance. The costumes which are large and heavy, is the most distinctive characteristic of Kathakali.  The makeup is very elaborate and to wear layers of colours is very time consuming. Kathakali is a world famous highly stylized Indian Classical Dance Drama, known as the king of performing arts. Each character’s mental quality can be understood by his or her costumes and facial makeup. They have also arranged facilities for you to observe the Kathakali artists don their makeup.

Apart from the dance, they also perform Kalarippayattu, the traditional marital art of Kerala. Many of the moves are adapted from Kung Fu, Judo and similar martial arts. Experts of this marital art from need to undergo several years of rigorous practice. They have to building up of courage, fitness of mind and body. It is known as the mother of all martial arts. Training in combat is given at the Kalari (training school).

The values of Kalari education specify that training in martial art begins with an oil massage of the body. This goes on until the body is agile and supple. Feats like jumping, running, and somersault are then taught initially. They teach the use of weapons such as daggers, swords, spears, maces, the bow and arrow. Even bare hands are used to show body control.

Witness some challenging moments, and be mesmerised by the spell and charm of both the shows. The vision that the organisers hold is really crystal clear. This is remarkably presented through the enormous talent and vigour that the performances are laid with.

Love this? Explore the entire list of places to visit in Munnar before you plan your trip.

Fancy a good night's sleep after a tiring day? Check out where to stay in Munnar and book an accommodation of your choice.