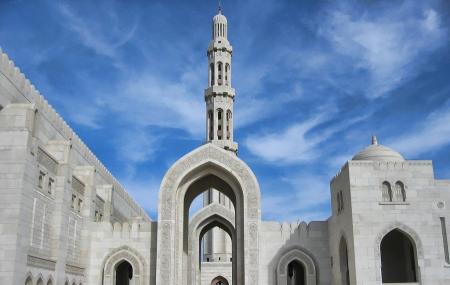 If you had a window seat on your flight into the city you would have noticed this architectural wonder even from the sky. The Sultan Qaboos Grand Mosque is the third largest mosque in the world and a shining beacon that lights up the Muscat city skyline.  Its golden-lit dome is 50 meters off the floor and is a spectacular sight in the clear desert nights. The mosque took over 6 years to be constructed, and features the world’s 2nd largest hand-woven Persian carpet, a 14 meter gold-plated Swarovski chandelier and five beautifully proportionate minarets that rise like graceful fingers into the night sky.

Inscribed with Islamic art and the many names of Allah in various scripts, the inner walls of the mosque are a marvel in themselves. The entire grounds are open to the public during visiting hours (check Sultan Qaboos Grand Mosque timings) , including the library and the frangipani-filled and beautifully manicured gardens. The tranquil desert air and quiet vibes of this place of worship make it a beautiful place to visit.

Love this? Explore the entire list of places to visit in Muscat before you plan your trip.

Fancy a good night's sleep after a tiring day? Check out where to stay in Muscat and book an accommodation of your choice.