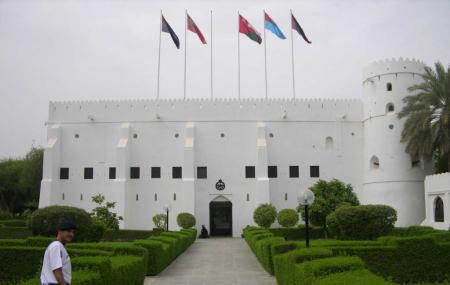 Located in the Bait Al Falaj fort (Built 1845) this historic site was constructed by Said Bin Sultan, the ancestor of the current monarch of the country. Kept in pristine white condition, the fort now contains snippets of Oman’s military history including a collection of armaments, canons, uniforms etc. That reflect this small nations glorious past.

The fort actually served as military headquarters from 1918 to 1978. In 1978 it was converted to a museum on the orders of H.M Sultan Qaboos Bin Said, and the museum was opened in 1988.

It has separate galleries dedicated to the Portuguese in Oman, Oman’s relationship with Islam, The Al-Busaidi dynasty (which includes the current monarch), as well as dedicated galleries to the various branches of the armed forces including the Royal Air force of Oman, Royal Navy of Oman, Royal Army of Oman etc. There is also a separate gallery dedicated to the reign of the current monarch, His Majesty Sultan Qaboos Bin Said.

The museum library contains a collection of books on military and historical sciences, and can be accessed by the public between 7:30 a.m. and 2.30 p.m.

How to Reach The Sultans Armed Forces Museum

Love this? Explore the entire list of places to visit in Muscat before you plan your trip.

Fancy a good night's sleep after a tiring day? Check out where to stay in Muscat and book an accommodation of your choice.