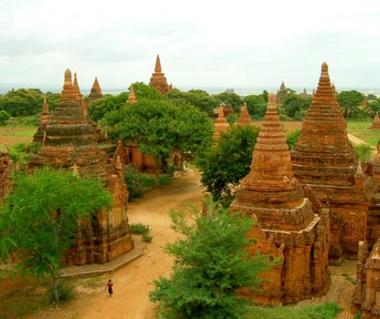 Plan Your Trip To Myanmar

Places to visit in Myanmar

Lush, tortured and rich in tradition, Myanmar is one of South East Asia's hardest to tour countries. It's highly unfortunate that long periods of political and military turmoil have left this vibrant country so inaccessible. Still, what little you can see is a treasure.

The people! Casual, humorous and laid back, the Burmese people are a colourful bunch. Outside of cities, they live close to their lands and haven't changed much over the years. The people are highly friendly and welcoming, especially if you're courteous and have been picking up the Burmese language. Shopping in Burma, you won't find too many luxury brands, but the place is a handicraft haven. And as for the food… let's say it can sometime be an acquired taste.

It rains a lot in Burma. The most popular tourist season, then, is the dry season between November and February. It's horribly hot between March and May, so definitely avoid going then, unless you're visiting a hill station. Temperatures can reach north of 40ºC in some places! Between July and September, the monsoon rains will try and drown the lands, making it extremely difficult to get around.

Getting into Myanmar is usually simple. Apply to the local Myanmar embassy for your visa. The process is simple and only takes a few days in most places. ASEAN and EU countries and the USA are provided with various visas on arrival schemes. Check the embassy website for details. Regular tourist visas are valid for 3 months but only last 28 days post your arrival in the country. This does not extend beyond visa validity period. Places without embassies can get an approval letter online.

You MUST fly into the country in most cases. Getting in through the border is not currently permitted to the general public. Most flights will be connected into Myanmar (Yangon) from Bangkok, Singapore and Kuala Lumpur. There are also occasional flights from Kolkata, Taipei, Hong Kong, Guangzhou, Ho Chi Minh, Seoul and a few others. There are three land entries into Myanmar from Thailand, but obtaining permits and the logistics of travel are a huge hassle.

Myanmar has been in a state of political unrest for along time now and many international sanctions have been imposed on the country. Many of its areas are restricted, and getting access to them requires special permits, usually from Yangon. These permits can be had from the Myanmar Tours and Travels (MTT) offices or from police stations. Still, the infrastructure is terrible. By far the best way to get around the country is by flight. If you're flying, remember to pick up your tickets at least a day in advance, preferably two if possible.

Travelling by train is an unhygienic and uncomfortable nightmare. Buses are cheaper, less exploitative and faster. Still, the rail trip form Mandalay to Pwin U Lwin is something spectacular. And trains are a wonderful way to meet and mingle with the people. River ferries have a large network. Another good way to get around is hire a car and driver. The rates are quite reasonable.

Rice and vegetarian food is a Burmese staple, but foreigners may find initial exposure to the cuisine to be a bit off-putting. Still, it's cheap in most places. The cuisine is influence heavily by Chinese and Indian traditions. Seafood is common along the coast. Some of the must try dishes (be brave) include mohinga (a fish gravy), Onnokauswe (noodles in coconut milk chicken broth), Nan GyiThoke (rice noodle with chicken sauce) and some really spicy curry.

Avoid tap water at all costs. Carry bottled water everywhere. Avoid Chinese tea, but definitely try the Indian milk tea. Don't consume alcohol if you're in a conservative area, at least not in public. Of the local bears, Myanmar Beer and Mandalay Beer seem to be the best options. Also try toddy juice (made from fermented sugar cane) and Shwe le maw.

Myanmar is not fussy about how well its visitors sleep. Hotels are perfunctorily outfitted and are rarely luxurious. Rooms are usually small, but will generally contain hot water if the hotel is licensed for foreigners. Electricity is unstable; it comes and it goes, so be opportunistic about charging your phones. And even if you've paid for it, there's no guarantee your Air Conditioner will work. All these problems are considerably reduced in the bigger cities though.

Myanmar has a good reputation for tourist safety but that doesn't mean you can get careless. You'll find many beggars around on the streets in the cities, and if you're from Europe or the US, a dollar is an extremely generous charity. Keep your belongings secure no matter where you've kept them though