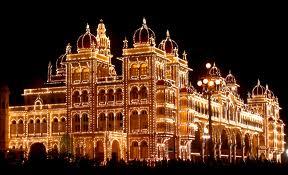 Imposing and grand, the home of the Wodeyar Royal Family is nearly as impressive as the Taj Mahal. It also has much more to offer. The palace is a eclectic mix of Muslim, Rajput, Hindu and Gothic architecture styles. There are four main rooms; the Ambavilasa (for private audience with the King), the Doll Pavilion, the Kalyana Mantapa (the marriage hall) and the Diwaan-e-Aam (the Public Audience Chamber). In these rooms you’ll find ornately gilded columns, stained glass ceilings, decorative steel grills, chandeliers with fine floral motifs, traditional dolls, Indian and European sculpturing. Some of these were made in England and Scotand before being brogut here. Rememebre to check out the three temples outside the palace, dedicated to the Lords Shiva and Vishnu and an avatar of Vishnu.

Though it’s impressive enough in the day, the palace is magnificent during the autumn festival of Dusserah, when it’s lit up, and prominent Indian artists perform in front of it. The Palace is also illuminated on Sunday evenings and other public holidays from 7:00p.m – 7:45p.m.

How to Reach Mysore Palace

Love this? Explore the entire list of places to visit in Mysore before you plan your trip.

Fancy a good night's sleep after a tiring day? Check out where to stay in Mysore and book an accommodation of your choice.

90.42% of people prefer to travel by car while visiting Mysore Palace

People normally club together Om Shanthi and Jaganmohana Palace while planning their visit to Mysore Palace.