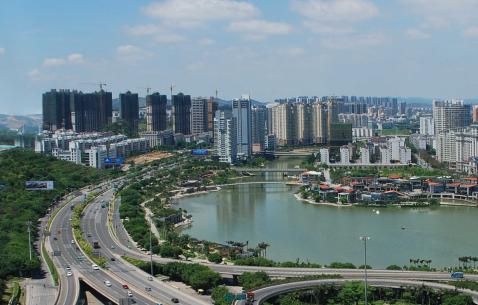 A gateway to the China’s south-west, Nanning is the capital Guangxi Zhuang Autonomous Region bordering Vietnam and facing the Southeast of Asia. Due to its ideal location, the city has become a transportation, commercial and communication centre between China and Southeast. It is also the cultural, economic and political hub of the region. The city takes pride in its prosperous economy which was by the agricultural trade with Guangzhou and other neighbouring cities. Nanning is often on the itinerary planners of a lot of tourists, especially the ones travelling from Vietnam to China.

The earliest records of Nanning trace back to the age of Eastern Jin Dynasty, where it was turned into the capital of Jinxing Prefecture. It was a settlement area of Baiyue people prior to that. The city was renamed as Nanning Lu in 1324 during the Yuan Dynasty. Nanning became a centre for trade under the rule of Song Dynasty and continued to flourish as commodity distributing centre in the Ming Dynasty.

Tourism of Nanning has a perfectly balanced natural wealth and cultural and historical heritage. It is a modern city, with well-developed residential areas, shopping and entertainment centres, commodity streets, merchandise marts, and many other elegant places to visit for the locals as well as the tourists. The city is bestowed with a plethora of verdant trees and blooming flowers all year round, thus earning it a nickname of ‘Green City’.

The itineraries of tourists visiting Nanning include trips to several places of cultural and historical heritage. Nanning is blessed with a number of natural wonders, lush green parks, ancient town spaces and murals. The tourist information centre helps you with the maps, brochures, guide books and other relevant information about these places.

Spend a joyful holiday by adding Nanning to your vacation planners. Visit the tourist attractions in the morning and hit the streets after the sunset to experience their vivacious night life. Spend some time conversing with the locals under the light of colourful street lamps. Indulge yourself in some of the fun-filled activities to do, and nibble on some of their delicacies at the local bars and cafes.

Plan Your Trip To Nanning

The best tours and activities in the city, guided by experts to give you a local insight to the best of Nanning