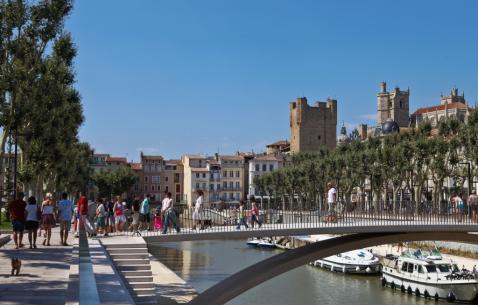 A charming old city in the Languedoc-Roussillon region of France, Narbonne may look stale at first look, but slowly captivates you with its picturesque countryside, overlooking stretch of the Mediterranean and sightseeing places with historical significance. The town once flourished with a bustling port and is now regenerated with focus on its famous wine production and tourism trade.

The earliest records of settlements in the city dated back to 118BC. It soon became one of the wealthiest Roman colonies and later became the capital of Gaul. Narbonne saw prosperity as a major fishing harbour until it was flooded in the 14th century. The floods altered the course of River Aude, making it a backwaters city.

Narbonne now stands 15kms inland with Canal de la Robine as its epicentre. The beautiful promenades off the canal, waterside cafes and shopping stalls which would be the best part of your Narbonne itineraries.

The city is also known for its Cathedral of Saint Just and Saint Pasteur, Les Halles, the famous glass market, and the vineyards of Corbieres. This less populated city is perfect for a laid back holiday on your vacation planner. A stroll along the canal’s walkaways during the evenings, tasting wine and tapas at those tiny restaurants and shopping for souvenirs at their markets will make your stay at Narbonne worthwhile.

Essential travel information and Narbonne tips for your visit

Plan Your Trip To Narbonne

The best tours and activities in the city, guided by experts to give you a local insight to the best of Narbonne