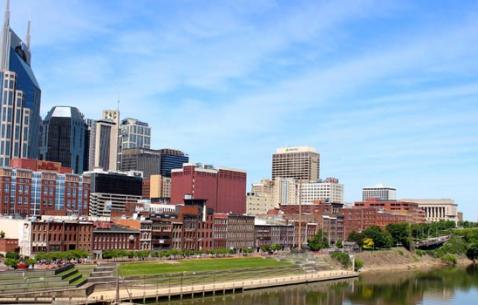 Nashville is the largest city in Tennessee and is the third largest city in the South-eastern United States. It is located on the Cumberland River in the north-central part of the state. The city is a centre for the music, healthcare, publishing, banking and transportation industries. It is home to numerous colleges and universities.

The town of Nashville was founded by James Robertson, John Donelson, and a party of Over mountain Men in 1779, near the original Cumberland settlement of Fort Nash borough. It was named for Francis Nash, the American Revolutionary War hero. In 1806, Nashville was merged as a city and became the county seat of Davidson County, Tennessee. In 1843, the city was named the permanent capital of the state of Tennessee.

The downtown area of Nashville features an assorted assortment of entertainment, dining, cultural and architectural tourist and sightseeing attractions. The Broadway and 2nd Avenue areas feature entertainment venues, night clubs and restaurants. North of Broadway lie Nashville's central business district, Legislative Plaza, Capitol Hill and the Tennessee Bicentennial Mall. Cultural and architectural attractions can be found throughout the city. As the home of country music, Nashville has become a major music recording and production centre. All of the Big Four record labels, as well as numerous independent labels, have offices in Nashville, mostly in the Music Row area.

Much of the city's cultural life has revolved around its large university community.

Popular sightseeing destinations include Fort Nashborough and Fort Negley, the former being a reconstruction of the original settlement, the latter being a semi-restored Civil War battle fort. Go to the Tennessee State Museum and The Parthenon, a full-scale replica of the original Parthenon in Athens. The Tennessee State Capitol is one of the oldest working state capitol buildings in the nation, while The Hermitage is one of the older presidential homes open to the public.

Essential travel information and Nashville tips for your visit

Plan Your Trip To Nashville

The best tours and activities in the city, guided by experts to give you a local insight to the best of Nashville