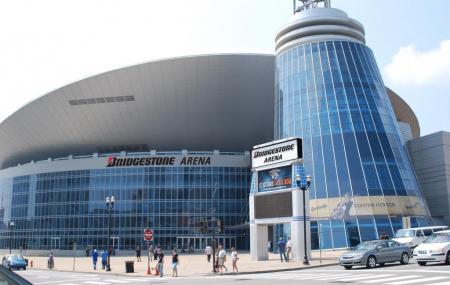 Stopover at the Bridgestone Arena which is Nashville’s number one venue for large scale musical productions. It opened in December 1996 and is proud to host the nation’s highly applauded entertainment and sports.

It was known as the Gaylord Entertainment Centre and the Sommet Centre and became Bridgestone Arena in 2010. Bridgestone Arena also holds different non-traditional functions for Davidson County. The tower here is home to the Tennessee Sports Hall of Fame, and an XM Radio studio. It is also home for the Nashville Convention and Visitors Bureau. Bridgestone Arena features the Patron Platinum Club, which is a 260 seat fine dining seating area. This is located on the building’s suite level and is open before and after games and concerts. It hosts a number of banquets and receptions as well.

The venue had numerous concerts, religious gatherings and major basketball events. The PBR Built Ford Tough Series bull riding event is held here every year. The arena has 6000 square feet of meeting room space and a rehearsal hall for rent. It is used by national touring acts throughout the year. The Bridgestone Arena was nominated for the 2007 Pollster Concert Industry Venue of the Year Award.

How to Reach Bridgestone Arena

55.75% of people prefer walking in order to reach Bridgestone Arena

People normally club together Country Music Hall Of Fame And Museum and Ryman Auditorium while planning their visit to Bridgestone Arena.