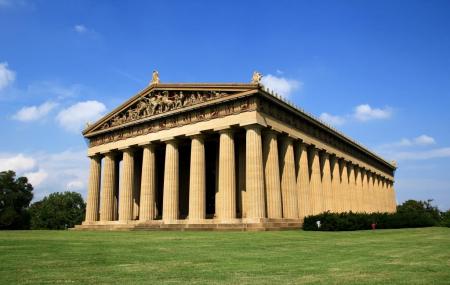 Find hotel near The Parthenon

This may be one of the best kept secrets in the Southeast. The Nashville Parthenon is an amazing replica of Athens' Parthenon. The structure is awesome and the inside inspiring. The art exhibit and history of why and how the Parthenon was built is exceptional.

Athena is the ancient goddess of wisdom and learning. At Nashville, the museum houses the tallest indoor sculpture of Athena in the western world. She is cuirassed and helmeted, and carries a shield on her left arm. In her right palm is a small statue of Nike, which stands for Victory. The statue is 42 feet high, gilt with more than eight pounds of gold leaf.

It was built for the Tennessee Centennial Exposition in 1897. However the building became unsafe and was rebuilt in 1929. There is no straight line. No two columns are the same size. No two columns are placed at the same distance. No two steps are the same size and the floor is not square or level. The Parthenon houses the city’s permanent art collection, and plaster cast of the Elgin Marbles. It has a gift shop and a visitor’s centre. It is proudly known as the Athens of the South.

Entrance Ticket Details For The Parthenon

How to Reach The Parthenon

93.85% of people prefer to travel by car while visiting The Parthenon

People normally club together Rca Studio B and Bluebird Cafe while planning their visit to The Parthenon.