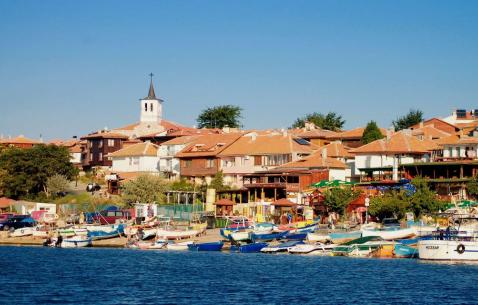 Nessebar, also known as Nessebar or more fondly ‘The Pearl of the Black Sea’, is the perfect place if you are looking for medieval churches and old-world architecture flooding its routine streets. The small rocky city is a short 40 kilometers away from Burgas, located in the Black Sea.

The old part of the town that is supposed to be partly underwater is connected to its new one by a man made isthmus.

A trip to Nessebar is a treat to the ever-exploring traveler. The drive to the old city is as memorable as the city’s star attractions! Cutting across the blue waters, the city exudes its charm the moment you can see its beautiful buildings.

Nessebar is an ancient city and it bears the stories of its many kingdoms and civilizations within its walls. The rich history, so prominent here, has earned it the title of a World Heritage Site by UNESCO.

The city was originally a Thracian capital which was invaded in the 6th century B.C by the Greeks. The city shows its commercial roots as a trading hotspot after the invasions. In the 3rd century B.C, Romans intruded the city and added yet another facet to its rich history. In the medieval era, Byzantine invasion in the 5th century A.D gave the city its true characteristic appeal followed by Ottoman rule in 1400s!

The yacht base embracing the Black sea, the tapering roofs of the buildings, the old stone architecture which houses its religious feel and the streets which calmly lead you to the its star attractions, is sure to make you unwind and really get one with the place around you. This has led to a tourism foothold in Nessebar. The city now accommodates luxury resorts to offer a unique experience with its scenic beauty.

If you are looking for a place which will calm you down, visit the city off season (after or before summer) when the place is frugally crowded. Your travel itinerary will be a unique one with the ancient city of Nessebar.