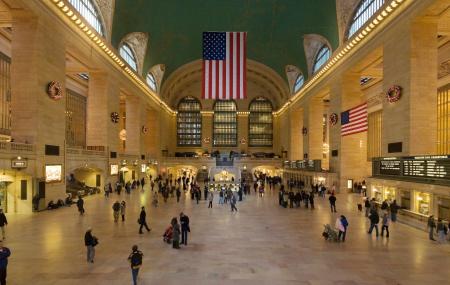 Grand Central Terminal has been described as “The World's Loveliest Station”, which is mostly visited for its amazing architecture and great historic significance! It is a grand Beaux-Arts building which serves as a transportation hub connecting train, metro, car and pedestrian traffic in an efficient way. Every day, some 750,000 people travel through Grand Central. It remains the largest train station in the world, by number of platforms (44).

Grand Central's oldest continually operating business is the Oyster Bar, which opened in 1913 with the terminal. The other recognizable clock, atop the information booth at the center of the hall, has four clock faces made completely of opal. It's valued between $10-$20 million worth Look up. The zodiac mural on the roof of the main hall depicts "the Mediterranean sky during the October to March zodiac," featuring 2,500 stars. This loveliest Grand Central Terminal New York tourist attraction added in the New York City Itinerary 5 Day.

How to Reach Grand Central Terminal

79.39% of people prefer to travel by car while visiting Grand Central Terminal