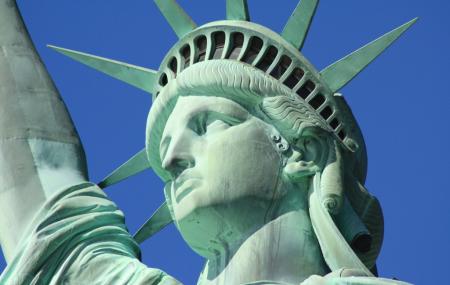 You must have heard about The Statue of Liberty, even before reaching New York and that proves the popularity of this place. The statue was designed by a young French sculptor, Frederic-Auguste Bartholdi. The statue's face was modeled after his mother's and the story goes that the body was modeled after a prostitute. The crown of Lady Liberty, as the statue is often affectionately called, has seven spikes, symbolizing the Seven Seas across which liberty should be spread. In her left hand she holds a tablet with the Declaration of Independence and in her right hand a torch, symbolizing Enlightenment.

The Statue of Liberty is 46.5 meters (151 feet) tall and together with the pedestal it reaches a height of 93 meters (305 feet). You can take the staircase inside the statue and walk all the way up the 354 steps to the crown from where you have a nice view over New York City. If you want to enter either the pedestal or the monument's crown it is best to reserve tickets well in advance.

How to Reach Statue Of Liberty

87.65% of people prefer to travel by car while visiting Statue Of Liberty

People normally club together National 9-11 Memorial Museum and Ellis Island while planning their visit to Statue Of Liberty.

People also prefer to start their day with Statue Of Liberty.