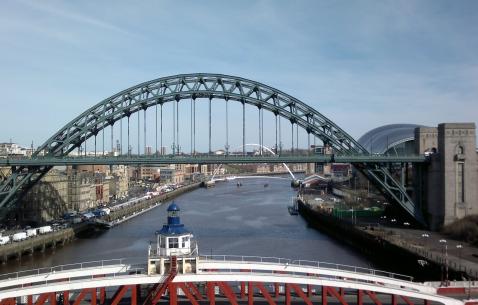 This area was first settled in Roman times. The settlement was called Pons Aelius at the time. It’s current name though, was only adopted in 1080, named after the castle built here by Robert Curthose, William the Conqueror's son (the castle keep is now one of the city’s main tourist attractions.)

Trade in wool made the city wealthy in the 14th century. During the Medieval Era, the city was an important defence outpost for England against the Scots. When the port was built in the 16th century, the city became even richer, especially on the back of the coal trade, on which the city had a long monopoly. In the 17th century, more than one third of the city perished to the bubonic plague. During the English civil war, the city sided with the King’s Royalists vs. Cromwell’s Parliamentarians. The 18th century saw a thriving trade in print and glassworks. In the 19th century, the city’s ship-building and engineering capacities made it very important to the Industrial Revolution. The city was one of the first in the world to be lit up by electricity.

Tourism-wise, Newcastle’s main draw is its charming river-walk, known as the Quayside. The Ouseburn valley, the runs along the Ouse River, is an important natural heritage. The city’s also famous for its nightlife – comedy shows, stand ups, quirky bars and pubs. It’s a thriving hub for North-East England lifestyles and art and culture. The historic (and sightseeing) heart of the city is in Grainger Town, which is a collection of pretty streets and ornate buildings. The Grainger Sunday market is an important weekly event, and one of the best places to fraternise with the locals.

Newcastle upon Tyne which is commonly known as Newcastle is a city in Tyne and Wear in the England. Newcastle is known for its art, music and nightlife and is one of the liveliest and most diverse cities of England. Places to visit and see in Newcastle are: The River Tyne, a short walk from the station, this place has pedestrian path on either sides; The Tyne Bridge, a compression arch suspended-deck bridge; The High Level Bridge, a wrought iron tied arch bridge that was built in the 19th century; The Gateshead Millennium Bridge; remains of Castle Keep; Central Arcade, a Victorian style shopping arcade; Grainger Town; Hadrian's Wall; Grey's Monument; Grainger Town; The Vampire Rabbit; St Nicholas Cathedral; and Stowell Street.

Essential travel information and Newcastle Upon Tyne tips for your visit

Plan Your Trip To Newcastle Upon Tyne

The best tours and activities in the city, guided by experts to give you a local insight to the best of Newcastle Upon Tyne