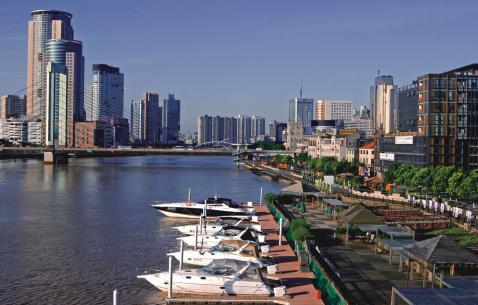 Located towards the south of Hangzhou bay, Ningbo is a Chinese port city in the Northeast of Zhejiang province. Formerly spelled as Ningpo, it is said to be one of the oldest cities in China that prospered under the reign of several dynasties. The city is now a major part of Shanghai shipping centre and an important industrial centre in the region. The city’s rich heritage and profound cultural foundation found its place on the itinerary planners of several enthusiastic tourists.

Ningbo was the birth place of Hemudu Culture, and has a history that traces back to 4800BC. It was one of the trade centres for the Song Dynasty and was one of the marine points on the Silk Road, about two thousand years ago. It was later under the rule of Tang, Ming and the Qing dynasties until it was made one of the five treaty ports after the opium war. It was bombed with the bubonic plague flea bombs by Japan during the World War II. Today, the city is economically well-developed and highly focuses on its tourism industry.

The city thrives to attain modernization while still sticking to its traditional roots. The Residential, Commercial and Entertainment spaces bundled on the sides of main roads reflect the modern architecture, while many streets and alleyways are stuffed with traditional buildings and markets. However, the outskirts of the city offer a different picture with the beautiful natural resorts and clear-water lakes.

The itineraries of Ningbo involve a lot of temples and religious centres, given its strong connections with Buddhism. The city takes pride in its historical tourist attractions, known for their subtle architecture and wonderful scenery. People of Ningbo are extremely passionate about preserving their culture, and are excellent craftsmen. So, don’t be surprised to find a lot skilfully carved handicrafts like the bamboo vases or animal figurines in the local shops.

So in this vacation, try to include Ningbo in your trip planners. Explore all the beautiful places to visit in the old city, buy yourself some hand-made souvenirs at one of the local street shops and nibble on some fresh local seafood delicacies.

Plan Your Trip To Ningbo

The best tours and activities in the city, guided by experts to give you a local insight to the best of Ningbo