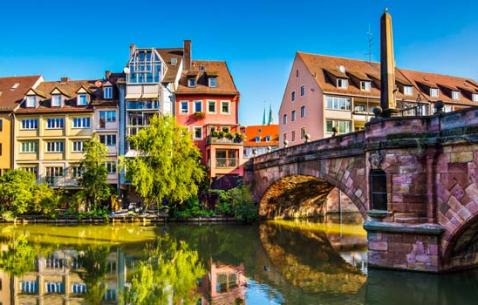 Glistening and glaring with its medieval architectural wonders, situated in Bavaria Germany, Nuremberg stands distinguished in Europe owing to its history Of Nazi regime, German Renaissance and Christmas markets. A confluence of medieval and the modern, the town imprints its memories on the minds of the visitors with sights and landscapes which have no parallels anywhere else in the world. A picture perfect Fleisch Bridge built upon the river Pegnitz, the Old Town or its medieval walls embellish this city and unravel the stories that went into making them. The city’s name is left immortal for having given birth to the new forms of German Renaissance art and artists- the most famous of all, Albrecht Durer, was actually born here. Nuremberg’s Christmas markets have been attracting tourists from all over the world, recreating the medieval charm and filling the air with enticing smells of mulled wine and rum punch, roasted almonds, Nuremberg bratwurst and gingerbread.

In juxtaposition to its revelry, the city has also been a witness to one of the darkest periods of human history- the Nazi Regime. Believe it or not, people visit Nuremberg today, to witness the vestiges of Nazi political megalomania. The site of famous Nuremberg Trials, which ultimately redeemed this city for propagating peace and justice to humanity by punishing its offenders.

With such a chequered history, Nuremberg today, stands for the glory and darkness of human establishment- a perfect destination to understand history, to view the picturesque Germany and to immerse into culinary delight.

Essential travel information and Nuremberg tips for your visit

Plan Your Trip To Nuremberg

The best tours and activities in the city, guided by experts to give you a local insight to the best of Nuremberg