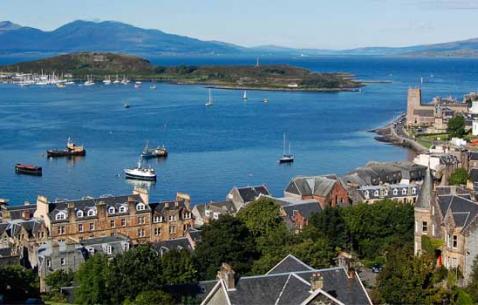 Oban (/ˈoʊbən/ OH-bən; An t-Òban in Scottish Gaelic meaning The Little Bay) is a resort town within the Argyll and Bute council area of Scotland. Despite its small size, it is the largest town between Helensburgh and Fort William. During the tourist season, the town can play host to up to 25,000 people. Oban occupies a setting in the Firth of Lorn. The bay is a near perfect horseshoe, protected by the island of Kerrera; and beyond Kerrera, the Isle of Mull. To the north, is the long low island of Lismore, and the mountains of Morvern and Ardgour.

Oban, Scotland's seafood capital, is located on the country's western coast in the Argyll and Bute region of Scotland. Also known as “Gateway To The Isles,” it is about ninety-five miles north of the city of Glasgow. Oban is known as the shopping and drinking capital of the west coast of Scotland.