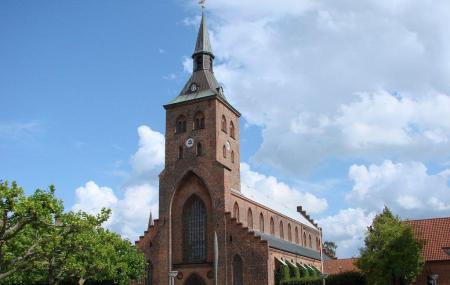 The King after which this cathedral is named, Canute, was a very troublesome figure during his lifetime…. At least the nobles he ruled thought so. Eventually, he was heated enough that amidst much drama, a mob gathered to murder him and killed him at the main altar of St. Alban’s Priory church. The story of his death caught popular imagination, and stories of miraculous healings at his burial site began to spread through the land. That was eventually enough for the Roman Catholic church to canonise the man.

In his honour the Bishop Gisico erected a new and grand church in the 1300’s one that had come to be known as the finest work of Gothic Architecture in Denmark. It took 200 years to complete the cathedral and it was finally finished in 1499. Pilgrim would come from all over to view the crypt where the skeletons of the king and his brother are kept.

Notice the bright and high nave, the magnificent altarpiece and burial linen from a thousand years ago.

How to Reach Odense Cathedral

Love this? Explore the entire list of places to visit in Odense before you plan your trip.

Fancy a good night's sleep after a tiring day? Check out where to stay in Odense and book an accommodation of your choice.

89.39% of people prefer to travel by car while visiting Odense Cathedral

People normally club together Odense Zoo and Carlsens Kvarter while planning their visit to Odense Cathedral.